Spam is not always what you think it is 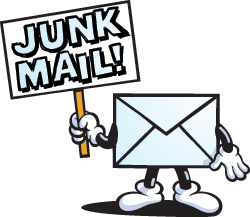 There are several kinds of spam emails.  One is where the recipient's service provider identifies an email as spam, and unceremoniously dumps your email.

Another similar situation is where a recipient's email client applies its own rules and sends your email to their junk folder.  It's quite surprising how many people don't bother to check their junk mail folder until the sender calls them up to ask "Did you get my email?"

A third type is where your service provider's mail server is blacklisted, because another sender's email has been reported as spam.

A fourth type is where a recipient of your email or newsletter is so irritated that they report you as a spammer.  This option is particularly damaging because that one report may result in you being blacklisted, meaning that many other people you email will stop getting your emails or newsletters.

One trap that many publishers fall into is where their service provider detects many identical emails going to a single location, say a lot of gmail addresses, and blocks their being sent. Or, such emails are successfully sent, but the gmail server detects a batch of identical emails arriving to multiple mailboxes, and decides they're spam.

Finally there are those newsletters that might comply with all the anti-spam rules and pass through anti-spam algorithms, yet still end up in the recipient's junk mail folder.  These are the ones your intended reader decides it's spam.  Here are some reasons why.

You're sending too many newsletters.  If you're a newspaper, readers expect daily alerts.  If you're supplying industrial widgets, monthly or even quarterly technical bulletins are enough.

The content is of no interest to the recipient.  Sending technical diesel engine data to readers who are financial controllers will be seen as being of no interest.

Your email isn't mobile-friendly.  Depending on whose statistics you accept, some 60% of emails are opened on a mobile phone.  If they're not mobile-friendly, they're likely to be dumped.

Your brand reputation is poor.  Readers will open an email from a trusted brand, but far less often from a relatively unknown sender.  It's crucial that you earn the trust of your newsletter recipients before you can expect emails to be reliably opened.

Your newsletters are selling stuff instead of informing.  People don't like being sold to - they prefer to be empowered by information so that they can decide to buy.  Give-away clues of such newsletters are those with PDF attachments and those with salesy titles and subject lines.

Your email doesn't display properly on the recipient's device.  Although all email clients can interpret some HTML, each client can only process its own partial set of commands. That carefully laid out newsletter that looks great on your own computer can easily end up looking a complete mess when it lands in your recipient's inbox.  Keep your newsletter layouts simple.

Here's a little ray of hope, though - every now and then your intended reader will take a look at their spam folder, and decide that your email wasn't spam after all.

Yes - I am interested in this type of Service